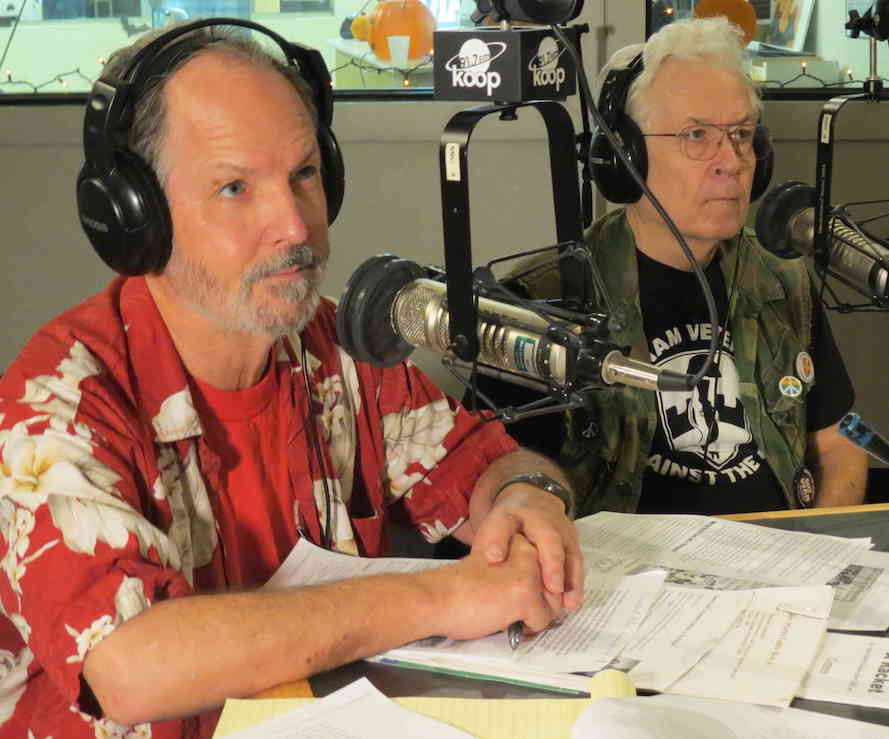 Terry DuBose and Alan Pogue -- who, upon returning from serving in Vietnam, organized GIs and Vietnam vets in opposition to the war -- are Thorne Dreyer's guests on Rag Radio. This is the second of two parts about "Vietnam: The War, the Movement Against It, and the GI Resistance," responding to the increased attention to the Vietnam War created by the release of the Ken Burns documentary. Note: Host Thorne Dreyer was also a leader in the '60s-'70s anti-war movement. (Part 1, with Thomas Cleaver and Alice Embree, was broadcast on Rag Radio Friday, October 6. Listen to the podcast here.)

DuBose and Pogue use the Ken Burns documentary as a taking-off point to discuss the war and its place in our history, including subjects -- like the underlying causes of the war, the GI rebellion, and the nature of the peace movement -- that the Burns film, with its attachment to false equivalence, either omits entirely or gets very wrong. Much of this Terry and Alan, as politically-active Vietnam vets, are able to discuss from direct experience.

Terry J. DuBose, a native of Brownfield, Texas, was an enlistee who served in Vietnam from 1966-'68. After the killings at Kent State he became actively involved in protest, organizing Texas Vietnam Veterans Against the War (VVAW) at UT-Austin in 1971. He also served as Texas state coordinator of VVAW, and was on the group's national steering committee. Terry lives in Austin and is Associate Professor Emeritus at the University of Arkansas for Medical Sciences.

Alan Pogue, now an acclaimed international documentary photographer who specializes in issues of social justice, was a chaplain and then a front-line medic in Vietnam with the 198th Light Infantry Brigade. He returned stateside a committed activist, heavily involved in the burgeoning anti-war movement in Austin, working with SDS and Veterans for Peace -- and as a photographer for Austin's underground newspaper, The Rag. Alan, the author of Witness for Justice (University of Texas Press) lives in Austin where he works through his Texas Center for Documentary Photography.Rag Radio is produced in the studios of KOOP 91.7-FM, an all-volunteer, cooperatively-run, solar-powered community radio station in Austin,
Texas, in association with The Rag Blog and the New Journalism Project, a Texas 501(c)(3) nonprofit. The host and producer of Rag Radio, Thorne Dreyer, is a prominent Austin-based activist and writer who was a pioneer of the ’60s underground press movement. The show’s engineer and co-producer is Tracey Schulz and the staff photographer is Roger Baker. The syndicated show is broadcast (and streamed) live Fridays, 2-3 p.m. (Central) on KOOP, and is later rebroadcast and streamed on WFTE-FM in Mt. Cobb and Scranton, PA., on Houston Pacifica's KPFT HD-3 90.1, and by KKRN, 88.5-FM in Round Mountain, CA -- and as a featured podcast at Veterans Today.